Thoughtful Thursday: A Walk Through the Woods 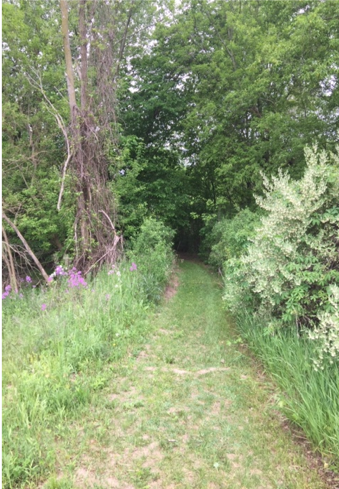 I have found great comfort the last few months just walking through the woods behind my house.  I enjoy walking along the mowed path that leads to my sister’s home. During the weeks of quarantine and isolation the beauty of nature has given me peace in the midst of unrest and uncertainty.  There are so many sounds and sights that delight the senses as I make my short journey through the wooded terrain.

I love to hear the chorus of the many songbirds, and the deer running through the thicket because they hear me coming.   As I make my way down the path there is the crackling sound of breaking sticks and the rustling of dead leaves being tossed about by a light breeze. A bunny hops across the path in search of his next meal and a cardinal takes flight from the pine tree he was resting on.  The pine tree is shedding its old pinecones and growing some new.  Both the old and the new draw their strength from the same tree.

A turtle creeps along the banks of the pond.

Yes, there is so much to observe as I walk through the woods and reflect on the beauty of God’s creation.

It brings to mind something I had recently heard.  A pastor said he had once asked a woman who was a holocaust survivor how she was able to endure the torment and suffering of the concentration camp.  Her response was simple and thought provoking.  She explained that everyday when she awoke and saw that the sun had risen, she knew that God had not given up on humanity, so she wouldn’t either.  So as I make my way home along the path, I know that in the midst of all the chaos in the world, God is in control and He has not given up on humanity.

Just as the moss finds a rock to live on Jesus is my rock and my hope for a better tomorrow.