The Sea Hare – by the Beach BUM 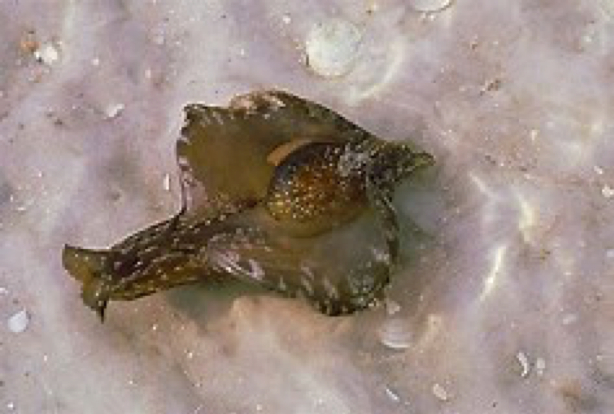 Greetings fellow Beach BUMS!  This week I am going to discuss a special little sea creature that most people could care less about.  This little creature is not colorful or beautiful.  It does not leap out of the water to catch your attention in an awe-inspiring way.  Most people just walk around its little body dying on the beach.  I first discovered the Sea Hare (of course I did not know its name) while taking my morning walk on the beach. I saw a blob laying helpless on the beach.  I touched it (NOT with my finger) and it moved.  It was alive!!!

Can you spot the Sea Hare?

I had compassion on the little Sea Hare.  I started to look for something to safely put the Sea Hare back in the water.  I had to improvise.  I immediately spotted a tool.  Can you see the tool in the photo?  Lying near the Sea Hare was a handy shell (Broad Paper Cockle Shell) that I used as a shovel.  I scooped up the Sea Hare and walked it into the water and tossed it.  It is important to get out of the surf because the poor Sea Hare is weak and will simply wash back up to shore.  They are not strong swimmers.  I watched for a while and sure enough the Sea Hare started to swim away.  Since that time I have tossed in MANY Sea Hares.  Sometimes they squirt a purple ink.  That is their only defense meant to confuse a predator.  It appeared that many of those I tossed in lived.  However, some did not live, but I prefer not to think about that.

One evening I was at the Marina and I noticed at least four Sea Hares heading right for my boat.  You see, the bottom of my boat was full of algae (needed to be cleaned).  The Sea Hare consumes algae.  If they can’t find algae they die of starvation.  Fortunately, there is a lot of algae on my boat.

The Sea Hare serves our oceans by cleaning harmful algae from coral reefs.  They deserve our respect!  If you see a Sea Hare lying on the Beech won’t you have compassion on it?  A true Beach BUM will find a way to place it back in the water.

The Sea Hare only has a one year life span.  Make it the best year ever!!

I referenced two websites to find information on the Sea Hare, Marine Biology and The Wildlife Trusts – Thank you for sharing information.

What creatures have you rescued by the sea?