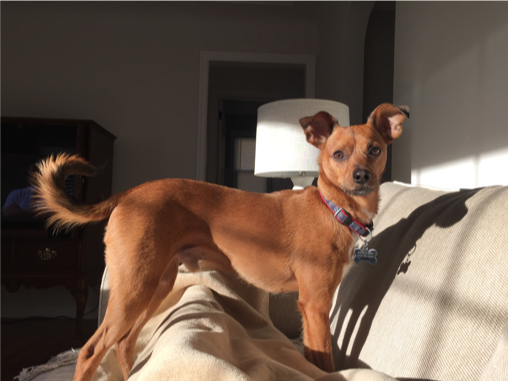 I can remember the day so clearly.  It was Friday, March 13 when my human didn’t wake up for work.  I was a little concerned for her, but relished at the thought of her staying home with me for the day.  After all, she had a busy week and I needed some quality time, a good long walk, and a snuggle.  Little did I know what I was I in for…

What I thought was just a three day weekend turned into THREE MONTHS of my human playing hooky from work.  Each morning I thought, Ok, today is the day where I can have my alone time back.  Then nope, think again Sully.  Everything was fine and dandy until each day my peaceful routine was thrown off.  My breakfast time became later and later, she was dragging me on two to three walks a day, my nap time was interrupted, and she was watching my every move.  I would constantly hear, “Bless you, Sully!” after I sneezed or “Big stretch.”  Can’t a pup have a moment to himself?!  Then about three weeks into her not leaving my house, things got even weirder!  My human started talking to herself on her computer screen…freaky, I know.  I would try and bark to ask her if she’s ok, but all I would get is a roll of the eyes and her talking to herself again saying, “I”m so sorry, my dog must hear the mailman.”  Little did she know I was very concerned for her.  Her outfits each day became grungier and grungier, she was constantly washing her hands, wiping down things, covering up her face with a mask, and the most worrisome of them all-NEVER LEAVING MY HOUSE!!

After I realized I was in for the long haul of this odd behavior from my human, I actually began to enjoy my napless days spent listening to her talk to herself.  I liked the way she moved a chair for me in the office so I can sit next to her while still looking at the window.  I was able to play with Minna (my BFF, cousin, and neighbor) because she was brave enough to escape under the fence from her human.  But most importantly, I loved the way my human loved me during those three months.  Although there were times I was concerned for her odd behavior, I knew that she needed me during her time at home, and I definitely needed her too.  So I guess you can say, I wouldn’t have traded that time for the world.  But now, I have to go take a long summer’s nap.