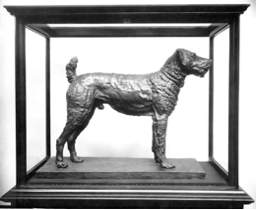 President Biden’s move into the White House will include his two German Shepard dogs, Champ and Major.  Champ is no stranger to his new home as he was a frequent visitor during President Obama’s term.  Major is a rescue dog who the Biden family adopted in 2018 from the Delaware Humane Society.  President Obama’s dogs, Bo and Sunny were Portuguese Water dogs, George W. Bush had a Scottish Terrier, Barney while Bill Clinton had a Labrador Retriever, Buddy. The White House is equipped with a kennel which is why so many U.S President’s throughout history had a dog.  However, the most popular dog was owned by the 29th President Warren Harding, Laddie Boy, an Airedale Terrier.

Laddie Boy is known as a celebrity dog because he accompanied President Harding to most places including the golf course, fundraising events and even cabinet meetings.  The New York Times wrote headlines about Laddie Boy and President Harding treated him like his only child who had free reign of the White House.  There is a tradition among some adults to hand out cigars after a major accomplishment.  Instead of cigars, President Harding had 1,000 miniature statuettes made of Laddie and gave them to his political supporters.  Today, those statuettes are worth thousands of dollars. Another interesting thing that Harding did was to write letters to the press that said, “Sincerely, Laddie Boy” at the closing!

Sadly, President Harding died of an enlarged heart in 1923 just two years after winning the election.  It was reported that Laddie Boy would look out the window and wait for his master to come home.  Edna Bell Seward, wrote a song, titled, “Laddie Boy, He’s Gone”.  After her husband’s death, Mrs. Harding gave Laddie Boy to the secret service agent, Harry Barker, who was assigned to take care of him.  More than 19,000 children donated a penny as a memorial to Laddie Boy.  The pennies were melted down and a sculpture was made of Laddie Boy by Bashka Paeff.  The sculpture is in the Smithsonian Institution’s National Museum of American History.