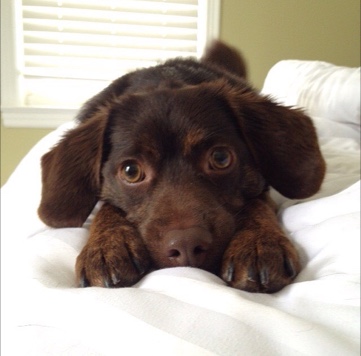 If you know Minna, you know she loves to eat. She’ll eat anything. And, she’ll do anything to get food. But never before have I seen Minna unwrap Lindt chocolate truffles and down eight of them. That’s right, eight.

On New Year’s Day, I got home later that evening only to find eight Lindt chocolate truffle wrappers on my couch. Everything else looked completely normal in my house. I called around to make sure no one else had eaten the chocolate and left the wrappers on my couch. It just seemed too impossible for Minna (however many human-like tendencies she may have) to jump up on my counter and reach into the chocolate bowl and carry them one at a time to the couch, where she then unwrapped each one carefully. Sadly, no one said they ate the chocolate.

That could only mean one thing; Minna. I noticed she was drinking way more water than usual, so as soon as I figured out she probably ate all of that dark chocolate (the most poisonous for dogs) I called the Animal Emergency Hospital in Grand Rapids. I rushed Minna over there where they immediately took her in and induced vomiting.

While waiting for Minna, and praying that she would be okay, all of the doctors and office staff went above and beyond. They truly cared about Minna, and every other dog and cat that entered the hospital that night. They were kind to every person, making a difficult and worrisome trip seem less troubling. The doctor that helped Minna made sure to tell me that this same thing happened to her dog last year. They constantly checked on Minna the hours we were there and made sure that they got all of the chocolate out. Then, a few days later, they even called to check up on her.

While we were waiting for Minna to get taken care of, it was clear how hard of a job those vets and office workers have at the Animal Emergency Hospital. They have to deliver a lot of bad news to people about their loving pets, and they work hard and long hours constantly under difficult situations.

I want to give a shout out to the Animal Emergency Hospital of Grand Rapids for taking such good care of Minna that night. Thank you for your prompt service, your calming words, and for loving her as much as we do!